Skip to content
Why are holidays so desirable? Because they snap you out from the monotony of the alarm clock routine and aspire you to rekindle your senses. I did exactly that for two weeks while soaking up the French air. To recount the exhilaration of this trip, a travelogue just wouldn’t suffice. After all a Paris itinerary is indeed so predictable – the colossal Eiffel Tower, the grand Louvre, the opulent Palace of Versailles and the ancient Notre Dame. But it is not so much about the sights than the feelings and flavours they evoked which I wish to capture here.

I might begin with the most evident statement that the grandeur and scale of their art and architecture is timeless and absolutely astounding. And the beauty of it is in its constant preservation, restoration and upkeep. My art affair began with one of the greatest sculptor’s of all times Auguste Rodin. His masterpieces “The Kiss”, “The Gates of Hell”, “The Thinker” and such other larger than life sculptures embellish the museum’s rooms and gardens. And so does the Louvre house breathtakingly brilliant and lofty sculptures under its magnanimous roof. A lot of these sculptures are nude inspired from the Greek and Roman mythology. But it was refreshing to see that people there do not find it amusing or embarrassing. They just admire the perfection in its composition, scale, posture and detailing and move ahead. Families with motley of age groups visit and all are perfectly at ease with the concept of nudity. After all it is just a human body. I might be wrong but I think a society which isn’t sexually repressed looks at human body in its rather natural and biological form. So the artists or the admirers might not be so avant garde than merely instinctive. More so the sculpting of every curve and sinew including the slightness of toenails is so extraordinary that it just makes for spontaneous admiration.

Next when I set my eyes on the painting section of the Louvre or the ones in the churches, it took my breath away. You just gape in disbelief at the sheer size of the canvas and its vividness. To put it in perspective, some of the canvas sizes are larger than a 2bhk flat in Mumbai. Beautiful art is one which transcends cultural or communal sensibilities, which makes you halt and notice. And it did exactly so. This phenomenal and staggering collection of art across Europe was accomplished during the Renaissance period almost 300 years ago and looks as radiant as commissioned yesterday. They are both symbolic and realist in their reproduction of events which are mainly historical or ecclesiastical in genre. And good Lord the detailing will almost knock you over with a feather. Some of the ones that completely awed me at the Louvre are the “Coronation of Bonaparte”, “The Raft of Medusa” and the “Wedding Feast at Cana”. They are so incredibly dramatic and engaging in their representation, almost life like. I am no historian, or an art critique or a curator and yet as a laywoman I felt so privileged to have seen some of greatest works of the master artists like Michelangelo, Raphael, Leonardo Da Vinci, Rodin, Bernini and others.

However, the ornate opulence of the High Renaissance Age can get overwhelming in time.  And so the prospect of another museum can be a bit exhausting. But my chance visit to the Musee de Orsay turned my art affair into almost a love affair. Just a little tip here, Musee de Orsay has a concessional entry ticket at 4.30 p.m. onwards. And to save 3 Euros per head we waited for an entire hour and half outside the museum. Idling time under the warm Parisian sun with lovely trumpet music in the air was actually delightful for us the unhurried travellers. And we thought we might have an extra cappuccino with those saved Euros. At the cost of sounding cheapskate let me tell you such antics just add a very tangy flavour to your memories one you will savour and laugh about.

Once inside, we marvelled at the magnificent railway station converted art museum. Of course we had had enough Renaissance art by then, so headed straight for the Impressionist Art Galleries. Oh! And its first glimpse was like a soft and gentle breeze caressing my ocular senses. I hadn’t had any clue about the Impressionist style of painting till then apart from the fact that I had heard and read about it in novels and movies where they forge or steal a Van Gogh or Renoir worth millions of bucks. But standing in front of these very original and real ones was quite exciting. I googled impressionism that very moment to understand what was I admiring after all. It was a nouveau art trend started by a handful of artists in Paris in the 19th century which redefined the use of light and shade to capture movement and life as it was.

The first words that raced to my mind seeing those paintings were “motion in stillness”. It is sheer genius that some deft fingers can reproduce every slight movement of life on mute, inanimate canvasses. Those still paintings are brimming with glorious life. The strokes and shades depict every nuance of motion from the ripple of a lake, to the sweeping autumn leaves in the wind, the rising of smoke and to the twirling of hair in the breeze. It is unimaginable until you behold it with your own eyes. Their dexterity is beyond compare, such that reveals if the subject is wearing chiffon or silk gauze.  The play of colours is so magical and profound that it even captures the succulence of the grapes through its translucent skin. Standing there under the splendour of Claude Monet, Edgar Degas, Camille Pissaro, Alfred Sisley, Van Gogh, Eduord Manet and the likes washed me with inspiration and exquisite delight. Their art is so compelling and moving both literally and metaphorically that it makes a commentator out of a clueless nonentity like me as well.

The aesthetic and artistic experience of this classic city only keeps getting better. At the apogee of art, it is like elixir for art lovers. Sainte Chapelle Gothic Church has the finest stained glass paintings in the world. The fifteen glass windows cover the entire perimeter of the church with minimum stone work and its intricate filigree like artwork is a kaleidoscopic burst of colours in the straining sunlight. It is quite a fascinating sight. The Montmartre is a bustling square of artists and cafes. Dozens of them with their easels and palettes are working on the canvasses with live subjects. I had seen such artistic romanticism only in Hollywood movies so far, but standing there in midst of it felt all the more surreal. It was tantalizing my creative urge. For a brief moment, I wished I didn’t have to return home and could stay there penning my stories sipping cappuccino in my own side cafe. 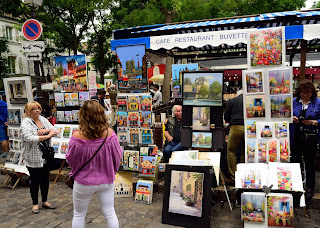 However, my Parisian reverie was short lived but the creative propensity continued as I went to the Sacre Coeur church in Montmartre. We were lucky to hear a parishioner’s recital there. There was no choir, yet a single parishioner’s orchestrated voice echoed through the enormous church. Such exemplary was its acoustics and organ system, a rich and unexpected aural treat. As we went around the altars, I saw a hunched figure looking fixedly at the wall and then at the floor repeatedly.  Being curious I inched closer and realized she was an art student, sketching a sculpture that caught her fancy. And I genuinely wondered why hadn’t I ever seen such ubiquitous creative revelry and passion in my native surroundings.

Paris is called the City of Love, and it showed on its streets. Apart from all the art and beauty that stoked my senses, the presence of love touched my heart. I am no anthropologist or have any knowledge as a social or cultural researcher. What I write here is simply an understanding and interpretation of life as a layperson.  In the course of soaking up the city I observed that couples, who might be locales or other western travellers married or otherwise, were very expressive about their affection to their partners. And what gladdened me more was that it included couples of all ages, the very young and passionate, the middle aged ones with teenage kids and even the elderly with probably grandchildren at home. We in our society are so averse to the idea of public display of affection to our partner that it was refreshing to see them. And what we might consider cheap, embarrassing or even indecent looked to me just a very loving gesture of care. Imagine you are waiting in the queue or strolling the park with your kids and suddenly you get a peck on the cheek from your partner or a gentle squeeze on your arm or a warm hug at the dinner table. It looked beautiful so I am sure it must feel better. I don’t know their cultural back stories, neither the success of their interpersonal relationships nor am I making cultural comparisons but to my eyes it only seemed that after years of rut and a general condescending familiarity they still didn’t take each other for granted. They meant something to each other and they showed it not for the world to see but for the joy of that moment’s togetherness.
I guess the French air did get to me for what started as an art affair is rightfully ending as a love affair in Paris. I will sum it up in a paradox, while Paris filled me with everything beautiful it opened me for so much more.

From Paris To Provence – A Second Love Affair

02 comments on “Love Affair In Paris”